2021 marks a milestone in Distform’s company history, celebrating 30 years of activity and continual growth since its creation in 1991 under its founder and owner Josep Ramón Subirà. 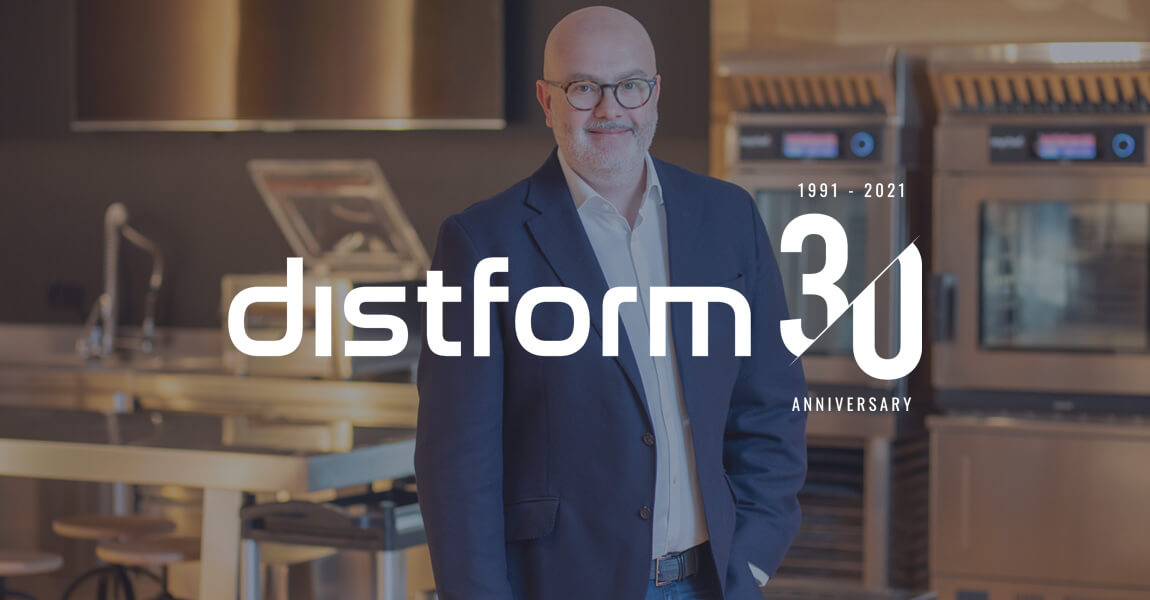 Distform’s story is that of an entrepreneur, who, aged 26, was working as a product development and delineation technician in a company in Lleida.  When that company failed due to management problems, he saw an opportunity to apply what he had learned over the years and embark on his own entrepreneurial journey. He contracted the best prepared operators and, with a colleague from the now extinct company’s sales department, collaboratively founded the entity that is now known as Distform.

According to its founder, the first few years were difficult, filled with hard work and constant learning.  In his own words, “we had adopted all the customs and ways of working of a company that no longer functioned, so we learned little by little. We all did a bit of everything really, sometimes without that much structure, but with a lot of enthusiasm and energy. Personally, I got involved in it all, from design and product development to managing staff, purchasing, administration… Basically, everything that was required to set up the company and take it forward.”

Initially, Distform focussed on producing professional made-to-measure kitchens, and soon began to make its name thanks to the quality of its finishes. It was limited, however, by the fact that it was a very local company. “As we were making everything to measure, we had to move locations to start and complete any contract, which limited us geographically.  We realised that that was limiting our future prospects, and also massively impeded our ability to plan ahead. When there were orders, we didn’t stop, and when there weren’t any orders, we didn’t do anything and everything ground to a halt.”

From this context, in 2000 an initiative to change the business model and introduce standardisation arose, which paved the way for the company’s first major milestone.  Automation enabled the transformation of a workshop into a factory with production lines, as well as initiating the first exports. As this process unfolded, Subirá, with a clear vision for expansion, brought his business partner on board to drive standardisation and automation within the business as a foundation for the company’s plans for growth.  The construction of a network of commercial delegates throughout Spain and the introduction of an innovative catalogue of products, in terms of both quality and aesthetics, moved the company towards setting itself apart in the sector. Distform focussed on innovation, not only in terms of its products, but also in its way of presenting its portfolio. “It was a real boom, because we were the first to do it: we dared to be aggressive and attractive in how we presented ourselves. In collaboration with a company that helped me identify and hire the right people, we made lift-off happen by putting highly capable people in key positions. We hired Jordi Pardell (currently CEO of Distform) as factory manager, a R+D manager, and so on. Essentially, a team of people who helped us to complete the transition to the company with international projection and ambition that Distform is today; a company that grows year after year, robustly and with consistent profits.”

The second key moment in Distform’s history was its decision to expand its product portfolio with a range that had enormous market potential. With Distform, the company had a brand that, until then, had gained prestige for the quality of its products and its customer-centric orientation.  The launch of the Mychef brand was the moment when it moved towards a business segment with greater potential for differentiation: “We saw that it was very difficult to promote a stainless steel brand, so we decided to move into ovens and packaging machines with Mychef.”

The opportunity to develop a solution adapted to the needs of low temperature cooking, a technique used to a great extent by Celler de Can Roca, led Distform to explore a new line of business. In collaboration with the award-winning chef Joan Roca, the company began designing and developing steam ovens specifically to meet the highest demands of low temperature cooking.

In 2011, under the new Mychef brand, the company launched the first oven with Tektherm technology on the national and international market, that was capable of cooking at low temperature without requiring a bain-marie, marking a new milestone for professional kitchens. Today, Mychef has become a renowned brand that offers integral solutions for the catering and food industry, including a wide range of ovens, packaging machines, regenerators and chillers.

Today, through its two brands, Distform is well-known for offering professionals in the restaurant, hotel and food industry not only innovative products of the highest quality, but also a fast and flexible service adapted to the needs of its customers.

As for which moment has been the proudest and most fulfilling, Subirà has a clear answer: “There have been many, but in general, all the times that come to mind for me have to do with the great people that this company has always been able to rely on. Without doubt, Distform’s backbone is its people and its ability to rely on a team that has made all of this possible, which has always given its all to ensure things are done well. That’s definitely one of the aspects that fills me with most satisfaction and pride.”

Despite the current moment of uncertainty related to the effects of the pandemic that has impacted the catering sector, Subirà remains optimistic: “Despite the crises experienced by the sector, we have always had an upward trajectory, we have known how to adapt; we have never become complacent, and we are sure that we will make our vision of being one of the world leaders in professional kitchens a reality!”

Currently, the Distform company has a team of 100 people and a portfolio that includes the Distform and Mychef brands, with over 12,000 references.

News, new products and much more.

LEARN ABOUT THIS PRODUCT